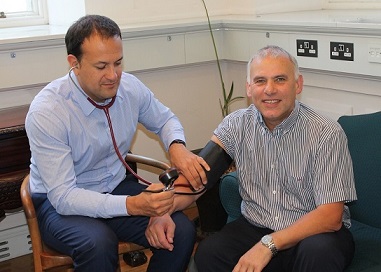 International Men's Health Week (MHW) always begins on the Monday before Father's Day and ends on Father's Day itself.¬† During 2015, it ran from Monday 15th until Sunday 21st June.

Each year, there is a focus upon a specific theme.¬† The theme for 2015 on the island of¬†Ireland was: 'Creating Culture Change - it's time for a new script'.

There is certainly a need to do this, as men, in Ireland, experience a disproportionate burden of ill-health and die too young ...

Please use the links below to find out more about MHW 2015 and what happened this year ...

Why should we focus upon 'Creating Culture Change'?

Tell others about your Men‚Äôs Health Week 2015 Event

Why should we focus upon 'Creating Culture Change'?
Not too long ago, we were unaware of the full extent of men‚Äôs poor health status and the specific health issues that they face.¬† However, this is no longer the case.¬† In recent years, a broad range of research has highlighted the health challenges which face men in Ireland and further afield. For example ...

A Report on the Excess Burden of Cancer among Men in the Republic of Ireland (PDF, 2.95MB¬†)

Although the health of men in Ireland is poor, it can be improved in many significant ways.¬† Work has already been done to support the health needs of men and boys: Ireland was the first country in the world to have a National Men‚Äôs Health Policy; the ‚ÄėEngage‚Äô Men‚Äôs Health Training Programme has influenced how services and structures support males; new innovative and pioneering initiatives have been developed which provide a model for improving aspects of men‚Äôs health ...¬† Much has been achieved, but there is room for more.

However, men‚Äôs health is not just an issue for individual men.¬† While it is crucial for men to take responsibility for looking after themselves, their health can often be determined by other factors outside of their personal control.¬† Thus, there is also a need for policy-makers, service providers, and society as a whole to recognise the role that they need to play, and to do something practical about it.

‚ÄėIt‚Äôs time for a new script‚Äô which re-defines how men look after their health, as well as how they can be actively supported to do so.¬† This requires focusing upon ‚Äėcreating culture change‚Äô in Ireland which views men‚Äôs health as being everyone‚Äôs business.¬† MHW 2015 offered a launch pad to do this.

Planning Group for Men's Health Week
Men's Health Week (MHW) 2015 in Ireland was planned by a broad range of partners who contributed to an all-island inter-agency Planning Group.¬† This body met, and had ongoing communication with each other, between November 2014 and¬†April¬†2015.¬† It was convened and coordinated by the Men‚Äôs Health Forum in Ireland (MHFI).¬†

The theme for this year‚Äôs MHW (i.e.¬†'Creating Culture Change') offered an opportunity for a very wide range of agencies to participate, and the planning process for 2015 drew upon the insight, expertise, support and contacts of individuals from ...

There were two types of poster available - hard copy (A3 size)¬†and online electronic files (in a range of sizes and formats¬†suitable for a variety of uses).

Hard copies of the poster could be ordered by emailing Colin Fowler¬†and¬†providing a name, organisation (if applicable) full postal address, telephone number (in case there was a problem with delivery), and the number of copies required.¬† Unfortunately, stocks soon ran low, and we could only send a maximum of¬†five posters to any¬†organisation.

The online resources were available at: www.mhfi.org/mhw/mhw-image-pack.html

Even people who didn't have time to do anything else for MHW 2015 were encouraged to put up a poster to let everyone know when it was taking place.

We are very grateful to the Belfast Tea and Coffee Company on Royal Avenue, Belfast, for allowing us to use their caf√© for the poster photo-shoot. 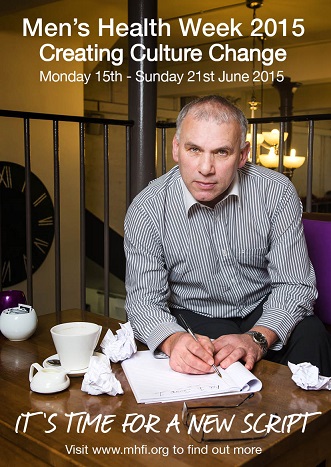 Postcard for Men's Health Week 2015
Men's Health Week (MHW) 2014 was the first time that Ireland had a postcard to publicise this week.¬† These cards were displayed¬†as small flyers in public spaces and were sent by organisations to the men that they have contact with.¬†¬†This¬†proved to be very successful.

In the lead-up to MHW 2015, 10,000 postcards were made available to anyone wishing to use them¬†to promote the week.¬† The front of the postcard was a smaller version of the poster image, and the back had a pre-written message which said:

Just a note to let you know that International Men's Health Week 2015 begins on Monday 15th June and lasts until Sunday 21st June.

During Men's Health Week, EVERYONE is being asked to help to create a change in our culture which supports the health and wellbeing of men and boys.

It's definitely time for a new script, but what's the story going to be? ...

Have a great week and, most importantly, remember to look after yourself in both mind and body.

All copies of the postcard were distributed within weeks of their release.

Who is the Men‚Äôs Health Week ‚ÄėPoster Boy‚Äô for 2015?
Former international rugby player Tony Ward (Irish sporting legend, prostate cancer sufferer, and champion of men‚Äôs health) acted as the ‚Äėface‚Äô of Men‚Äôs Health Week 2015 in Ireland, when he starred in a nationwide poster campaign.¬† He also appeared on the cover of the free, 32 page ‚ÄėChallenges and Choices‚Äô Man Manual which was given to men across the island of Ireland.

Tony - now a sports journalist (Irish Independent), rugby coach, rugby commentator (RTE) and Ambassador for the Heartbeat Trust (raising awareness of heart failure and associated prevention strategies) - is, undoubtedly, a legend on the island of Ireland.¬† However, he is also a man who has faced a personal battle against prostate cancer and, in recent years, has been prepared to share his story publicly with others in order to create a culture change in how men look after their health.

Tony was an Irish Rugby Union and soccer player during the 1970s and 1980s.¬† He played rugby as a Fly-Half for, amongst others, Munster, Leinster, Ireland, the British and Irish Lions, and the Barbarians.¬† He was selected as the 1979 European Rugby Player of the Year, and was the first ever recipient of this title.

In 1978, Tony played a key role in Munster‚Äôs legendary victory over New Zealand at Thomond Park - when he scored two drop goals and a conversion in a 12-0 victory.¬† To date, Munster is the only Irish team ever to beat the All-Blacks.¬† He also won 19 caps for Ireland between 1978 and 1987, and made his international debut against Scotland at Lansdowne Road aged 23.¬† He helped Ireland win 12-9 and, during the 1978 Five Nations Championship, scored 38 points - a record for a debutant.

Tony also played football for both Shamrock Rovers and Limerick United.¬† In his last season with Rovers in 1974/75, he scored six league goals.¬† In 1981, he played for Limerick United in the UEFA Cup and, in 1982, helped them to win the FAI Cup.

Men‚Äôs Health Week 2015 Logo and Image Pack
One of the key aims for Men's Health Week (MHW) each year is to let as many people as possible know when it is happening.¬† To do this, there needs to be a common set of promotional tools.¬† These are available for free downloading at: www.mhfi.org/mhw/mhw-image-pack.html

This page includes generic MHW images, new resources created specifically for MHW 2015, as well as the ones used in previous years.¬† There is a MHW logo in a range of sizes and formats, a Facebook¬†banner, a poster, and even a 'We Support Men‚Äôs Health Week' image - for groups and individuals who want to be seen to be doing their bit!

Groups and individuals were invited to use any or all of these images to promote MHW in their own workplace, community, organisation, project, business, Church, club, university, youth centre ...

'Challenges and Choices' Man Manual
During Men's Health Week (MHW) 2014, the Men's Heath Forum in Ireland printed 10,000 copies of 'Challenges and Choices‚Äô -¬†a free, 32 page, manual for men on the island of Ireland which highlighted a range of key challenges to men‚Äôs health¬†and offered three practical choices for dealing with each condition.¬† This booklet was written by Dr Ian Banks (President of the European Men‚Äôs Health Forum), and is based upon the highly successful series of ‚ÄėHaynes Manuals for Men‚Äô created by Ian.¬† All hard copies of this publication were distributed within days of the launch.

Given the success of this resource, an updated and revised version of 'Challenges and Choices' was produced for MHW 2015.¬† This publication was funded¬†by the Health Service Executive in the Republic of Ireland, and the Public Health Agency in Northern Ireland.¬† You can see a Portable Document Format (PDF, 4.8MB) version of what¬†it looks like by clicking here.

10,000 copies of the booklet were printed, and all were¬†given out within weeks of their release. 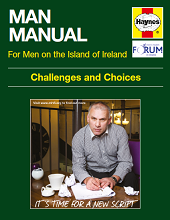 How to keep up-to-date with the latest MHW 2015 news
Everyone was invited to keep up-to-date with the latest news on Men‚Äôs Health Week (MHW) 2015 by checking out our Facebook (www.facebook.com/MensHealthWeek) and Twitter (www.twitter.com/MensHealthIRL) sites.¬† They were¬†also encouraged to¬†click on the ‚ÄėLIKE‚Äô / 'FOLLOW' buttons, and to send the link to all their friends.

The focus for MHW this year (i.e. ‚ÄėCreating Culture Change‚Äô) lent itself to a wide range of ways to mark this occasion.¬† However, there was no need to¬†stick rigidly to this particular theme.¬† Anything which could promote the week and encourage men and boys to lead healthier lifestyles, to be more aware of preventable health problems, and to seek early detection and treatment for health difficulties¬†was¬†very welcome!

Some people had the time, energy and resources to plan something big.¬† However, even if this was not possible, there were still many simple, free and easy ways to get involved / show support.

For inspiration, everyone was¬†invited to download our guide at: www.mhfi.org/mhw2015celebrateit.pdf¬†(PDF, 462KB)

Tell others about your Men‚Äôs Health Week 2015 Event
The Men's Health Forum in Ireland (MHFI) always seeks¬†to promote the details of activities or events that are being held throughout Ireland during Men‚Äôs Health Week on this website.¬† It is hoped that this will help everyone to find out what is happening during the week, where it will be taking¬†place, and how to join in.¬† It also gives some recognition and publicity to all those groups across the island that are doing something for and with men.

These activities can include health checks, conferences, launches, games, seminars, competitions, workshops, courses, displays, health fairs ...¬† Whatever the activity, everyone is encouraged to submit their details.

There were three ways to let us know about what was happening: 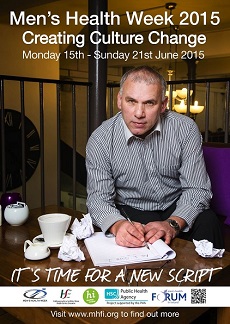