Each year, individual countries focus upon a specific theme.¬† The theme for 2013 in Ireland¬†was: "Action Men - Turning Words into Actions".

There is certainly a need to do this, as men, on the island of Ireland, experience a disproportionate burden of ill-health and die too young ...

Please use the links below to find out more about MHW 2013 and what happened this year ...

Why should we focus upon: 'Action Men - Turning Words into Actions'?

Tell others about your Men‚Äôs Health Week 2013 Event 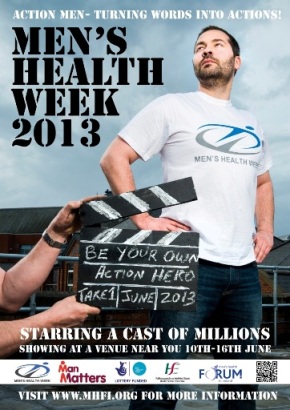 Why should we focus upon: 'Action Men - Turning Words into Actions'?
Not too long ago, we were unaware of the full extent of men‚Äôs poor health status and the specific health issues that they face.¬† However, this is no longer the case.¬† Therefore, we cannot ignore the needs of almost half of the population of the island of Ireland.

In recent years, a broad range of research has highlighted the health difficulties which face men in Ireland and further afield.¬† For example ...

This evidence clearly shows that men‚Äôs health could be improved in many significant ways.¬† However, men require cultural encouragement, structural support and practical opportunities to do this.

The Republic of Ireland was the first country in the world to have a National Men‚Äôs Health Policy.¬† This was founded upon a comprehensive review of men‚Äôs health evidence (both nationally and internationally), as well as consultations with a range of stakeholders - including men themselves.¬† Northern Ireland still lacks any dedicated formal framework / guidelines for assessing or meeting men‚Äôs health needs.

Now that we know what many of the key men‚Äôs health issues are, it‚Äôs time to do something about them.¬† This year, Men‚Äôs Heath Week called for action on men‚Äôs health.¬† There is a role for everyone.¬† Men‚Äôs health is not just an issue for individual men.¬† While it is crucial for men to take responsibility for looking after themselves, their health can often be determined by other factors outside of their personal control.¬† Thus, there is also a need for policy-makers and service providers to recognise the role that they need to play, and to do something practical about it.¬†

Frequently, we simply blame men for their own state of health, and focus upon the shortcomings of individuals without recognising that there are also wider social determinants of health.¬† MHW 2013 called upon everyone to do their bit to improve the lot of men and boys, and to start turning words into action.

Planning Group for Men's Health Week
Men's Health Week (MHW) 2013 in Ireland was planned by a broad range of partners who contributed to an inter-agency Planning Group.¬† This body met, and had ongoing communication with each other, between January and May 2013.¬† It was convened and coordinated by the Men‚Äôs Health Forum in Ireland (MHFI).¬†

The theme for this year‚Äôs MHW (i.e. Action Men) offered an opportunity for a very wide range of agencies to participate.¬† Indeed, the planning process for 2013 drew upon the insight, expertise, support and contacts of individuals from ...

Poster for Men‚Äôs Health Week 2013
To promote Men's Health Week (MHW) 2013, Michael Glover (from the Man Matters project) starred in an Ireland-wide poster campaign to raise awareness of the week.

There were two types of poster available - hard copy (A3 size) which could be ordered by emailing Colin Fowler, and an online electronic file (A4 size).¬† There were also a number of other sizes and formats of the poster - suitable for a variety of uses.

The online resources are available at: www.mhfi.org/mhw/mhw-image-pack.html

Even people who didn't have time to do anything else for MHW 2013 were encouraged to put up a poster to let everyone know when it is taking place.

Men‚Äôs Health Week 2013 Logo and Image Pack
One of the key aims for Men's Health Week (MHW) each year is to let as many people as possible know when it is happening.¬† To do this, there needs to be a common set of promotional tools.¬† These were made available for free downloading at: www.mhfi.org/mhw/mhw-image-pack.html

This page includes generic MHW images, new resources created specifically for MHW 2013, as well as the ones used in previous years.¬† There is a MHW logo in a range of sizes and formats, a web banner, a poster, and even a 'We Support Men‚Äôs Health Week' image - for groups and individuals who want to be seen to be doing their bit!

Groups and individuals were invited to use any or all of these images to promote MHW in their own workplace, community, organisation, project, business, Church, club, university, youth centre ...¬† However, they were asked to acknowledge the source.

How to keep up-to-date with the latest MHW 2012 news
Everyone was invited to keep up-to-date with the latest news on Men‚Äôs Health Week (MHW) 2013 by checking out Facebook (www.facebook.com/MensHealthForumIreland) or Twitter (www.twitter.com/MensHealthIRL).¬† They were also encouraged to¬†click on the ‚ÄėLIKE‚Äô / 'FOLLOW' buttons, and send the link to all their friends.

The focus for MHW this year (i.e. ‚ÄėAction Men - Turning Words into Actions‚Äô) lent itself to a wide range of ways to mark this occasion.¬† However, there was no need to¬†stick rigidly to this particular theme.¬† Anything which encourages men and boys to lead healthier lifestyles, to be more aware of preventable health problems, and to seek early detection and treatment for health difficulties was very welcome!

Some people had time, energy and resources to plan something big.¬† However, even if this was not possible, there were many simple, free and easy ways to get involved / show support ...

COMMUNITY / VOLUNTARY GROUP why not start-up a walking group, or organise a healthy eating cookery class, or form a men‚Äôs health group, or launch a men‚Äôs swimming / cycling club, or get your local leisure centre / gym to offer a free pass to men during MHW, or collate and display a list of local Helplines / support services, or ...?

SPORTING BODY why not use your unique position (as many men like sport already) to give out men‚Äôs health information at games, or get local men to join-in training sessions, or ask your best known player to give a men‚Äôs health talk, or develop forms of your game which older men can participate in,¬†or print men‚Äôs health messages on your players‚Äô shirts, or ...?

EMPLOYER why not organise health checks for men in your workplace, or set-up a regular game of football before / after work, or invite speakers to come in and give talks on specific aspects of men‚Äôs health, or produce your own workplace guide to men‚Äôs health, or offer an hour off to your employees to attend a men‚Äôs health event, or ...?

OTHER SERVICE PROVIDER why not display men‚Äôs health information in your public spaces, or direct your service users to men‚Äôs health programmes, or provide a room and administrative support for a local men‚Äôs health initiative, or think about helping to start a Men‚Äôs Shed or...?

MEDIA PERSON why not cover MHW 2013 in your publication, or research and produce an in-depth special report on a specific men‚Äôs health issue, or promote the work of a local men‚Äôs health project, or run a series of features on men‚Äôs health during MHW 2013, or ...?

WOMAN why not encourage the man / men in your life (partner, father, brother, uncle, grandfather, neighbour, friend, colleague etc.) to take part in one of the MHW events, or to see their GP about that niggling health concern, or to join a men‚Äôs health group, or ...?

MAN why not take a few minutes to look at the state of your own health, and make MHW 2013 the start date for a new beginning!!!

Click here for a copy of our paper on what you can do to mark MHW 2013.

Tell others about your Men‚Äôs Health Week 2013 Event
The Men's Health Forum in Ireland (MHFI) always seeks¬†to promote the details of activities or events that are being held throughout Ireland during Men‚Äôs Health Week on this website.¬† It is hoped that this will help everyone to find out what is happening during the week, where it will be taking¬†place, and how to join in.¬† It also gives some recognition and publicity to all those groups across the island that are doing something for and with men.

These activities could include health checks, conferences, launches, games, seminars, competitions, workshops, courses, displays, health fairs ...¬† Whatever the activity, everyone was encouraged to submit their details.

There were three ways to let us know about what is happening: 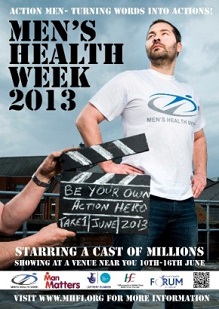