This year, Men's Health Week (MHW)آ ran from Monday 13th June until Sunday 19th June 2011.آ  The focusآ in Ireland was upon: "Promoting and Supporting the Health and Well-Being of Men and Boys during Challenging Times".

The world of men, and the roles that they play in it, have certainly changed dramatically in a very short period of time.آ  All of these changes bring new challenges (both positive and negative).آ  Therefore, the key message for this week was â€œletâ€™s talk about itâ€‌.

The health of men in Ireland is nothing to joke about ...

Please use the links below to find out more about MHW 2011آ and whatآ happened this yearآ ...

What is there to talk about?

What can I do to mark Men's Health Week?

Tell others about your Menâ€™s Health Week 2011 Event

...آ  So, for MHW 2011, everyone was encouraged to get talking about these and other issues which present a challenge to men and boys at this time.

Men's Health Week Planning Group
The Men's Health Forum in Ireland (MHFI) recognises that there are a lot of organisations and groups throughout Ireland who can contribute to the health and well-being of men and boys.آ  This work is not solely applicable only to those who work directly in the health field.آ  Indeed, the theme for this yearâ€™s MHW (promoting and supporting the health and well-being of men and boys during challenging times) offers an opportunity for a very wide range of agencies to participate.

To further the aims of MHW 2011, MHFI convened an all-island Planning and Advisory Group whichآ met on three occasions between February and May.آ  This bodyآ drew upon the expertise and contacts of individuals from ...

New Menâ€™s Health Week Logo and Image Pack
Menâ€™s Health Week (MHW) looked very different this year.آ  For the first time in Ireland, there was a common logo and an image pack which could be used, for free, by everyone who wished to raise awareness of the week.آ  These were important promotional tools - as one of the key aims for this year was to let as many people as possible know about the week.آ  The logo was made available in a range of sizes and formats, there were a selection of web banners on offer, and there was even a â€œWe Support Menâ€™s Health Weekâ€‌ image - for groups and individuals who wanted to be seen to be â€کdoing their bitâ€™!آ  Details of all of these can be found online at:آ www.mhfi.org/mhw/mhw-image-pack.html

Poster for Menâ€™s Health Week 2011
To highlight MHW 2011, local comedians Joe Rooney (Father Ted and Killinaskully) and Paul Tylak (Stew and Messers Tylak and Rooney) starred in an Ireland-wide poster campaign to raise awareness of the week.آ  The message for men was very simple: â€œThese are challenging times. Itâ€™s no joke. Letâ€™s talkâ€‌.

The posters were available in hard copy (A3 size) and as an electronic file (A4 size).آ  Details are available at:آ www.mhfi.org/mhw/mhw-image-pack.html Even those people whoآ didn't do anything else to support Menâ€™s Health Week (MHW) this year, were encouraged to put up a poster to let everyone know when it was taking place.

To add an extra element of creativity, the Menâ€™s Health Forum in Ireland (MHFI) invited organisations and individuals to put on their thinking caps, and come up with captions for a special online version of the poster.آ  Pleaseآ see below for details.

Men's Health Week 2011 Poster Competition
The Menâ€™s Health Forum in Ireland (MHFI) and the Irish Cancer Society (ICS) invited men to mark Men's Health Week 2011 by taking part in an Ireland-wide poster competition.آ  The aim of this competition was to find out what males are thinking about at this time - especially in relation to their own health and well-being.

MHFI producedآ a special version of the MHW 2011 poster.آ  This version had â€کthought bubblesâ€™ coming from the heads of the two main characters.آ  Entrants were asked to come up with an idea for what each of these men might be thinking about - in these â€کchallenging timesâ€™.

A panel of judges reviewed all the entries on Thursday 28th July 2011, and selected three which, they felt, best represent menâ€™s lives / issues / concerns ...آ  in Ireland today.

The three winning entriesآ came fromآ Belfast, Cavan and Cork.آ  Click on the place names to view these posters (as PDF, 175KB files).آ  To see all of the entries, click here [PLEASE NOTE:آ This is a veryآ large PDF file - 3.77MB - and will take quite a while to load].

These three winners will each receive a pair of tickets for the launch of the â€کMovemberâ€™ celebrations in Autumn 2011 (which will include travel expenses and overnight accommodation in Dublin).

All entrants were sentآ an electronic certificate to acknowledge their participation in this competition.

Facebook Page Seeks Fans!
To keep everyone up-to-date with the latest news on Menâ€™s Health Week (MHW) 2011, the island-wide Planning Group for MHW created a new Facebook page.آ  You can access this at:آ  www.facebook.com/MensHealthWeek

However, as all social networkers know, a page such as this is no use unless it has a lot of Fans - thatâ€™s where your help is needed!آ  Visit the page, click on the â€کLIKEâ€™ button, and send the link to all your friends. 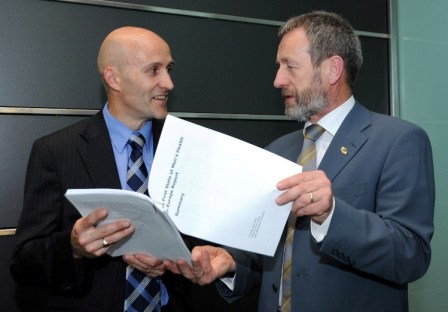 Men's Health Forum in Irelandآ Chairperson, Noel Richardson, with Sean Kelly MEP, at the launch of "The State of Men's Health in Europe" Report

The focus for this year (i.e. letâ€™s talk about the challenging times that we are facing) lent itself to a wide range of ways to mark this occasion.آ  However, no one hadآ to stick rigidly to this particular topic.آ  Anything which encouraged men and boys to lead healthier lifestyles, to be more aware of preventable health problems, and to seek early detection and treatment for health difficulties wasآ very welcome.

Some people had time, energy and resources to plan something big.آ  However, even if this was not possible, MHFI offeredآ simple and easy ways to get involved ...

COMMUNITY / VOLUNTARY GROUP why not start-up a walking group, or organise a healthy eating cookery class, or form a menâ€™s health group, or launch a menâ€™s swimming / cycling club, or get your local leisure centre / gym to offer a free pass to men during MHW, or collate and display a list of local Helplines / support services ...?

SPORTING BODY why not use your unique position (as many men like sport already) to give out menâ€™s health information at games, or get local men to join-in training sessions, or ask your best known player to give a menâ€™s health talk, or develop forms of your game which older men can participate in, or ...?

EMPLOYER why not organise health checks for men in your workplace, or set-up a regular game of football before / after work, or invite speakers to come in and give talks on specific aspects of menâ€™s health, or produce your own workplace guide to menâ€™s health, or ...?

MEDIA PERSON why not cover MHW 2011 in your publication, or research and produce an in-depth special report on a specific menâ€™s health issue, or promote the work of a local menâ€™s health project, or run a series of features on menâ€™s health during MHW 2011, or ...?

WOMAN why not encourage the man / men in your life (partner, father, brother, uncle, grandfather, neighbour, friend, colleague etc.) to take part in one of the MHW events, or to see their GP about that niggling health concern, or to join a menâ€™s health group, or ...?

MAN why not take a few minutes to look at the state of your own health, and make MHW 2011 the start date for a new beginning!!! 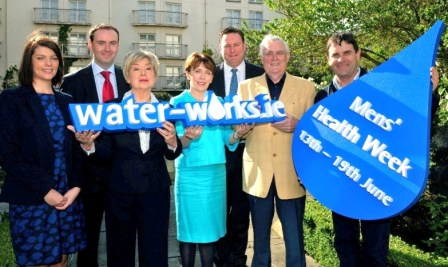 Men's Health Forum in Ireland Treasurer, Finian Murray, at the launch of the Waterworks Campaign, with Minister for Health Roisin Shorthall, Paul Carroll GP, and cast members from 'Fairآ City'

Tell others about your Menâ€™s Health Week 2011 Event
The Men's Health Forum in Ireland (MHFI) promoted the details of any activities or events that were held throughout Ireland during Menâ€™s Health Week 2011 on this website.آ  This helped everyone to find out what was happening during the week, where it would take place, and how to join in.آ  It also gave some recognition and publicity to all those groups across Ireland that are doing something for and with men.

Theseآ activitiesآ could include health checks, or a conference, or a launch, or a game, or a seminar, or a competition, or a workshop, or a lunch, or a course, or a drama, or a display, or a health fair ...آ  Whatever it was, everyone was encouraged to download, complete and return a registration form to MHFI. 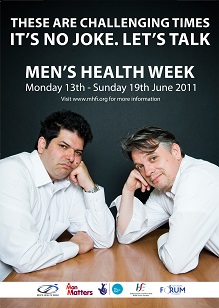